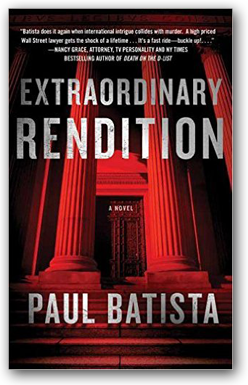 
When Ali Hussein, suspected terrorist and alleged banker for Al Qaeda, is finally transported from Guantanamo Bay to the US mainland to stand trial, many are stunned when Byron Carlos Johnson, a pre-eminent lawyer and son of a high-profile diplomat, volunteers to represent him. On principle, Johnson thought he was merely defending a man unjustly captured through rendition and water-boarded illegally. But Johnson soon learns that there is much more at stake than one man's civil rights. Hussein's intimate knowledge of key financial transactions could lead to the capture of or the unabated funding of the world's most dangerous terror cells.

This makes Hussein the target of corrupt US intelligence forces on one side, and ruthless international terrorists on the other—and puts Byron Carlos Johnson squarely in the crosshairs of both.

"Batista does it again when international intrigue collides with murder in Extraordinary Rendition. A high-priced Wall Street lawyer gets the shock of a lifetime...law school never prepared him for this! It's a fast ride—buckle up!..."
—Nancy Grace, attorney, television personality and New York Times best-selling author of Death on the D-List

"To summarize, this book is readable, portraying the concern that a law-abiding citizen might undergo at the mechanism of law and order and interaction with their surrounding organizations and constitutional instruments.... One of the interesting facets of the book is the interaction and legal jousting between Mr. Johnson, for the defendant, and the public prosecutor Mr. Rana. One maybe immediately reminded of TV dramas such as Boston Legal, The Practice, Suits, The Good Wife."
—Seattle Post Intelligencer

"Written by no-holds-barred-attorney Paul Batista, Extraordinary Rendition excels not only as an action thriller, but as a sophisticated legal procedural as well; tearing the curtains away from the nation’s most controversial issues... Provocative. Smart. Heart-pounding. A legal thriller of the highest order."
—Celtic Lady's Reviews